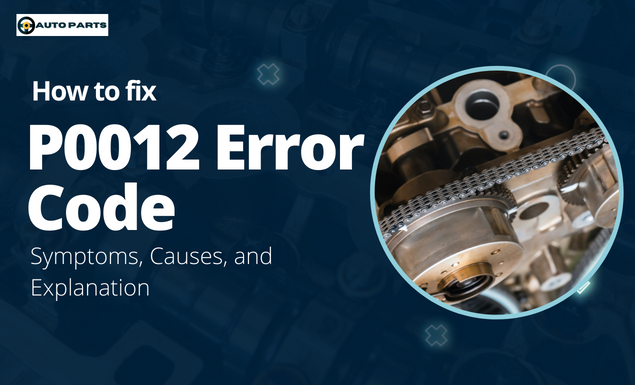 The P0012 error code, which is associated with a camshaft timing issue, is one of the frequent error codes you could encounter. It is very challenging to completely understand the meaning of the P0012 code unless you are familiar with the camshaft timing procedure.

Errors that the system in your car displays on the dashboard should not be disregarded because they may signal more serious problems. Thus, ignoring warning signs and problems could end up costing you thousands of dollars.

P0012 is formally known as Camshaft Position “A” Timing Over-Retarded.

Now, P0012 is pretty simple to grasp compared to other OBD2 codes with incredibly lengthy meanings. It means that the ECM discovered the intake camshaft timing stuck in the reverse position in bank 1. Additionally, it indicates that despite repeated signals from the ECM, the intake cam timing would not advance.

As a generic powertrain code, this diagnostic trouble code (DTC) is applicable to all automobiles using OBD-II technology.

A P0012 code refers to the vehicle’s PCM (powertrain control module) and the VVT (variable valve timing) or VCT (variable camshaft timing) components or Engine control module. VVT is a technology that is used in engines to increase power or efficiency at various running temperatures.

However, the P0012 DTC particularly pertains to the timing of the camshaft. If the cam timing is too delayed in this instance, the engine light will illuminate, and the code will be set. The intake left or front camshafts are all examples of the “A” camshaft. Moreover, this code only works with bank 1. The location of Cylinder #1 is on the engine’s bank on one side.

Let’s go over some fundamental information in order to determine what retard camshaft timing means, what it denotes, and how significant this code is for the overall performance of two cars.

Any combustion system must have intake and exhaust valves that open exactly when the engine says they should. The rotating camshaft is responsible for doing this.

The intake and exhaust valves open at the proper moments because the camshaft rotates as a result of the camshaft timing.

The center line of the cylinder should be considered while setting the camshaft timing. The camshaft is said to be moving forward when it rotates clockwise. On the other hand, if the camshaft spins in the other direction, it slows down.

Both critical rotations must happen at the same time in order to regulate the opening and closing of the intake and exhaust valves.

Without sophisticated scanning equipment and automotive experience, it is challenging to determine the precise reason for the P0012 engine code.

This code’s numerous potential reasons include the following since valve timing affects so many engine parts:

Operating the car for a long time without the camshafts retarding may cause additional problems with the valve train or engine.

Depending on where the camshaft broke, the engine may run erratically, stall, run rough, or have a challenging starting condition. The engine may also consume too much fuel, carbon may build up on engine parts, and there may be a variety of drive-related complaints.

The new car’s engine is the first thing you should examine. Check for any obvious loose connections in the control solenoid valve, the camshaft sensor, the crankshaft sensor, and any other wiring.

Monitor the engine oil level next. Additionally, it’s critical to check that the engine oil is clean and meets the viscosity requirements outlined in your vehicle’s owner’s manual.

You can also check the oil control solenoid valve as another option. To test whether the camshaft timing responds, try switching it on and off.

Connect the OBDII scanner to the computer. If your automobile is suffering from a bad camshaft position sensor, then it will show the P0012 code. Also, in more sophisticated scanners, you might even get an explanation of the issue and any suggested fixes.

Read more interesting automobile-related content at autovehicleparts.com. If you are looking to buy refurbished International used auto parts or components, then autovehicleparts is your go-to platform. Visit now.