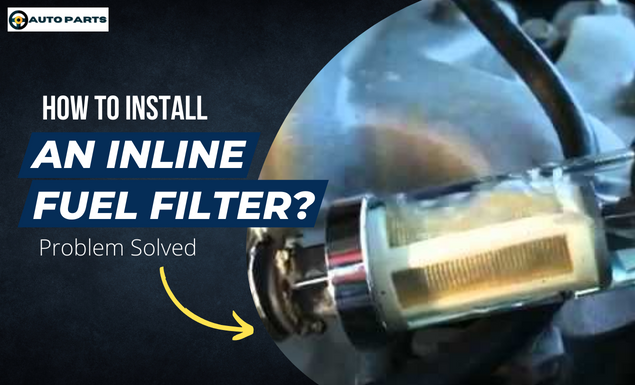 An average automobile has numerous significant filters. Since the oil filter and the air filter have a direct impact on an engine’s performance, most people are aware of their importance. A fuel filter is also crucial. Its function is to filter away any fuel particles in order to stop pollutants from being drawn into the combustion chamber by the engine.

Why is Inline Fuel Filter important?

A clean fuel supply is crucial for consistent engine performance and fuel system efficiency. The primary line of defence against dirt, debris, and tiny flakes of rust that fall off the inside of the gasoline tank is the inline fuel filter.

A mesh filter sock on the end of the fuel collection tube within the tank can help prevent larger pieces of metal and dirt from entering the gasoline line, but it cannot keep out the smaller particles that can be just as harmful.

Tiny particles can block injector inlet screens in fuel-injected engines, depriving the injector of fuel. The pintle valve may also become worn or jammed if debris enters the injector. The extremely tight tolerances inside the injection pump make clean fuel even more crucial for diesel engines.

Which direction does an inline fuel filter Go?

However, the majority of filters do feature an arrow indicating the direction of the fuel flow. The carburetor must be facing the arrow when it is installed properly. Autovehicleparts suggests pointing the larger end toward the engine if there is no direction on the replacement filter.

How to Change Inline Fuel Filter ?

The inline fuel filter cleans the fuel before it enters your engine. Therefore making it an essential component of your vehicle. The majority of the time, automobile owners don’t notice it until there is a power loss while acceleration and difficult acceleration. It can be a sign that your inline fuel filter is unclean. Below is a list of the procedures for changing the filter manually.

Put on your eye protection and have a fire extinguisher on your side.

You can release pressure from the gasoline supply line by removing the tank cap, putting a rag over the pressure test port, and pushing the valve core. Pressurized gasoline will spray all over you when you remove the old in-line filter if you don’t release the pressure.

Typically, metal clips or hose clamps are used to mount filters. Utilizing a rag, hold the filter. To remove the filter, use screwdrivers or needle nose pliers, depending on the situation. Remove the filter with care. Any gasoline leaks near the fuel filter and fuel line should be cleaned up.

To get rid of any fuel that may still be inside the old filter, shake it over a clean rag and then wipe the filter down to get rid of any leftover fuel. Examine the fuel that was left over after burning inside. Search for dirt and debris. These foreign bodies may have come from contaminated fuel, an old, rusted tank, or an old plugged fuel line.

Shake out any remaining fuel, then peek inside through one end. Check the mesh screen’s or the pleated paper’s cleanliness.

Attach the fuel cap firmly. Repeatedly turn the key to the ON position and back. Repressurizing the gasoline system is done by the fuel pump. Keep an eye out for fuel filter leaks coming from the tank. If required, tighten the clamp once more.

Step 6: Turn ON the Engine

Clean gasoline is given to your engine thanks to a brand-new inline fuel filter. With a new filter, the fuel system will be less congested, allowing for quicker gasoline delivery.

The filter is one of the least expensive auto parts that also has a crucial function. In other words, if at all possible, avoid skimping on this automotive component. Less expensive filters use less efficient filtration mediums, causing a poor traveling experience. The average gasoline inline fuel filter has a lifespan of around 25,000 miles. And if your filter has exceeded that point, you should get a new one.

If you’re the happy owner of a BMW, Mercedes, or any other vehicle, you can purchase high-quality fuel filters from the online store of auto vehicle parts. We cover a wide range of vehicles and have inline fuel filters from various manufacturers. Visit autovehicleparts.com NOW!

Inline fuel filter replacement will depend on the manufacture year, model, age, and driving style of your car. Thirty thousand miles or every two years is a reasonable general guideline.

Can you change a fuel filter with a full tank of gas?

What happens if the fuel filter is backward?

The reversed pressure difference across the filter would result from putting an inline fuel filter backward, causing the media to slide and obstruct flow.