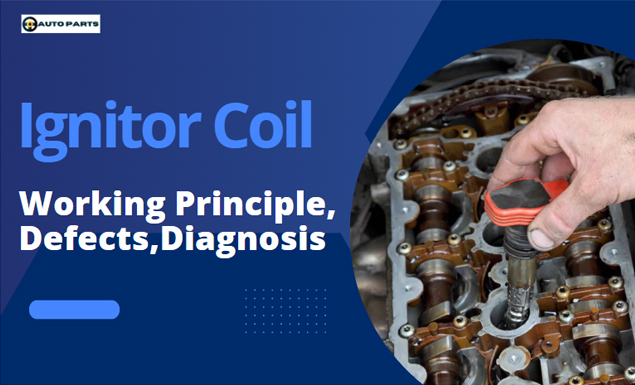 The necessary voltage can range from as low as 5,000 volts to as high as 25,000 volts or more, and it changes frequently. Under peak demand, some systems can output up to 40,000 volts.

Ignition coils make use of the interactions between electricity and magnetism to generate the necessary high voltages.

1) Enhancing the current flowing through the wire coil makes the magnetic field stronger.

2) The magnetic field strength increases with the number of windings in the coil.

You may notice issues starting or operating your automobile if your coil igniter is defective. Most probably:

When the coil in a distributor ignition system fails, it affects every cylinder. Car engine won’t start or misfire severely when it is under stress. A misfire that moves from cylinder to cylinder is another possibility. In the event that your engine is misfiring and the Check Engine Light is on, use a code reader or scan tool to check for misfire codes.

A coil failure typically sets a P030X misfire code on engines built after 1996. It includes OBD II and misfire detection, where “X” denotes the misfiring cylinder’s number. It is advisable not to assume a misfire indication as a bad coil, bad spark plug, or plug wire. An ignition coil bad symptoms, fuel problem, or compression problem can all result in a misfire code. Another possibility is a faulty injector or a compression leak.

A code may also be set for the coil on that cylinder if it is shorted or open. If there is no code, use a digital ohmmeter to determine the primary and secondary resistance of the coil. The spark plug should be taken out and examined as well. Check the spark gap and take a look at the deposits on the plug to see if the misfire is due to carbon or oil problems. Additionally, examine that the resistance of the plug wire, if one is present, is within acceptable limits.

A dirty or dead fuel injector may be to blame for the misfire if the coil, spark plug, and plug wire all seem to be in good condition. Perform a compression check to see whether the cylinder has a bad valve or a leaky head gasket and if the injector seems to be in good shape.

What coil to use with the PerTronix ignitor?

For PerTronix Ignitors installed on four- and six-cylinder engines, a 3.0-ohm coil should be used. It is advisable to use a 1.5-ohm coil for eight-cylinder systems. Almost any inductive ignition system can use these coils.

What is the price of Ignitor Coil price?

Does driving with a bad ignition coil possible?

The car will operate poorly with a bad ignitor coil. If not addressed, an ignitor coil issue can harm other auto components, particularly the catalytic converter, which could result in more severe issues.

Are you looking for refurbished car parts or components and confused about where to buy from? Visit auto vehicle parts now! The most trustworthy platform for purchasing international used auto parts.